The instrument is also called a lap harp, cymbala, yerbonitsa, or plucked psaltery. They’re so easy to play from your very first try! You simply slip the sheet music under the strings of the zither, pluck the strings in the order shown on the sheet music, and enjoy immediate success playing music! People never believe me when I tell them that kids as young as 3 or 4 can play the zither. Meet 4-year-old Abby; she has had only nine lessons and not only plays beautifully, but she also knows how to count eighth notes, quarter notes, dotted quarter notes, half notes, and whole notes!

Zithers are played by strumming or plucking the strings, either with the fingers (sometimes using an accessory called a plectrum or pick), sounding the strings with a bow, or, with varieties of the instrument like the santur or cimbalom, by beating the strings with specially shaped hammers. Like a guitar or lute, a zither’s body serves as a resonating chamber (sound box), but, unlike guitars and lutes, a zither lacks a distinctly separate neck assembly. The number of strings varies, from one to more than fifty. [1]

The word zither is a German rendering of the Latin word cithara, from which the modern word “guitar” also derives. Historically, it has been applied to any instrument of the cittern family, or an instrument consisting of many strings stretched across a thin, flat body – similar to a psaltery. [1]

Perhaps the most commonly owned entry-level zithers are the Melody Harp and Music Maker brands. World of Harmony books are compatible with these zithers as well as Appalachian Spirit Folk Instruments, Small World Toys, T.K. O’Brien’s, and more. Not sure if my books will fit your zither? The photo to the left shows the dimensions of compatible zithers. You can also download a free piece of music to print and try with your zither!

I have just started adding downloadable music for the Harbert Italiana Junior Zithers too! 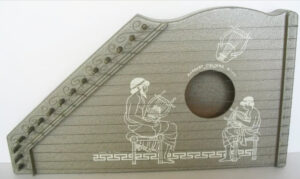 Don’t have a zither? Appalachian Spirit Folk Instruments in South Carolina is hand crafting beautiful, high quality hard wood zithers which are made exclusively for World of Harmony Music with our logo peeking through the sound hole. Each zither is individually numbered, labeled, and signed by the instrument maker. You can choose from a variety of hard woods and art work. To order one of these beautiful zithers, please contact Bill LaCasse at AppalachianSpiritFolk@gmail.com. You can also watch a video about Bill’s instruments.

Need help figuring out how to tune your zither? Watch me tune a zither with a free digital tuning app called “Pano Tuner” iOS Android. Just set your phone or tablet next to your zither, and the tuner lets you know when you’ve found the right pitch. Couldn’t be easier! They never arrive to your home or to a store in tune, because shipping knocks them out of whack. Here’s how a zither should sound in G Major scale.

Did you break a string? My business partners, Bill and Liza LaCasse, created a video showing how to replace a zither string.

Free domestic shipping when you spend a minimum of $40. Dismiss